December 9 – Decades of progress towards greater democratisation across Central and Eastern Europe (CEE) threatens to be undone unless urgent steps are taken to safeguard against corruption, new research from Transparency International warns.

The Government Defence Integrity Index (GDI) finds more than half of the 15 countries assessed in the region face a high risk of corruption in their defence and security sectors.

Released today, Progress [Un]Made identifies region-wide issues which provide fertile ground for corruption and the deterioration of governance. These include weak parliamentary oversight of defence institutions, secretive procurement processes that hide spending from scrutiny, and concerted efforts to reduce transparency and access to information.

These issues are compounded by the huge amounts of money involved, with spiralling military expenditure in the CEE region topping US$104 billion in 2019 as many states continue to modernise their defence and security forces. The 15 states featured in the report are responsible for a quarter of this total with the majority increasing their defence budgets in the last decade.

“Following major strides towards more robust defence governance in Central and Eastern Europe, many of these results should be a cause for concern. Corruption and weak governance in the defence and security sector is dangerous, divisive and wasteful. While it is encouraging to see a handful of countries score well the overall picture for the region is one of high corruption risk, especially around defence procurement – an area responsible for huge swathes of public spending.”

The GDI provides a detailed assessment of the corruption risks in national defence institutions by scoring each country out of 100 across five key risk areas: financial, operational, personnel, political, and procurement. Highlights from the CEE results include: 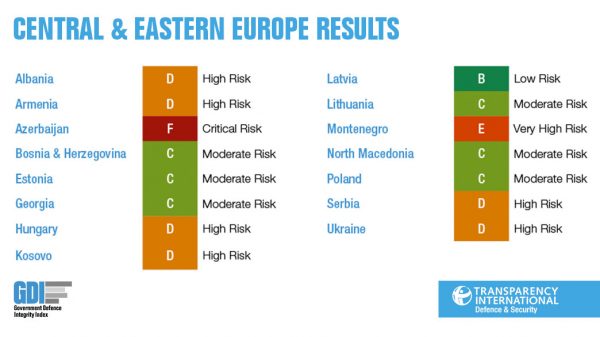 We identify five key themes that are increasing corruption risk across the region, including:

Allowing companies to bid for defence contracts helps reduce the opportunities for corruption and ensure best value for taxpayers, but our analysis highlights that open competition in this area is still the exception rather than the norm.

Access to information is one of the basic principles of good governance, but national security exemptions and over-classification shield large parts of the defence sector from public view.

To make real progress and strengthen the governance of the defence sector in the region, Transparency International calls on governments across the region to:

Progress [Un]Made – Defence Governance in Central and Eastern Europe can be downloaded here.

The CEE region spent US$104 billion on defence and security in 2019. This total includes Russia, which spent US$65 billion. Lithuania and Latvia increased military spending by 232 per cent and 176 per cent respectively between 2010 and 2019, and Poland by 51 per cent over the same period. Armenia and Azerbaijan consistently spend close to 4% of GDP on defence and are among the most militarised countries in the world.

Whilst defence governance standards in Europe are some of the most robust globally, states in Central and Eastern Europe and the Caucasus, where a combination rising defence budgets and challenges to democratic institutions, are particularly vulnerable to setbacks to their recent progress in governance and development.

In Armenia, Albania, Hungary, Kosovo, Montenegro, Poland and Serbia, there is a notable tendency for parliaments to align themselves with the executive on defence matters, for example by passing executive-sponsored legislation with no or only minor amendments.

In Hungary, the government has made it harder to access information by skewing the rules in favour of public bodies and imposing new fees on those who lodge requests. In Estonia, the 2013 access to information act contained 7 exceptions, with 1 related to defence; by 2018, there were 26 exceptions, with 7 related to defence. Just three of the 15 states we assessed – Lithuania, Latvia and Georgia – were found to have been responding to freedom of requests promptly and mostly in full.

Through chapters in more than 100 countries, Transparency International has been leading the fight against corruption for the last 27 years.

About the Government Defence Integrity Index

The GDI is the only global assessment of the governance of and corruption risks in defence sectors, based upon 212 indicators in five risk categories: political, financial, personnel, operations and procurement.

The GDI was previously known as the Government Defence Anti-Corruption Index (GI). The Index underwent a major update for the 2020 version, including changes to the methodology and scoring underpinning the project. This means overall country scores from this 2020 version cannot be accurately compared with country scores from previous iterations of the Index.

It is intended to provide governments and policymakers with an analysis of defence governance standards in the region and supply civil society with an evidence base that will facilitate their engagement with defence establishments and support advocacy for reforms that will enhance the transparency, effectiveness and accountability of these institutions.

This report details good practice guidelines and policy implications that are designed to reduce the opportunities for corruption and improve the quality of defence governance in Central and Eastern Europe. It identifies five key issues of defence governance where improvements are urgently needed in order to mitigate corruption risks: parliamentary oversight, defence procurement, transparency and access to information, whistleblowing, and military operations.