Ukrainian defence budgets have reached unprecedented levels, rising from 1% of GDP in 2013 to just under 5% in 2018 and 2019. However, increased funds are by themselves unlikely to fix the problems of the Ukrainian defence sector, whose inability to equip or lead its troops was exposed in the 2014 conflict. Behind the scenes, serious conflicts of interest and corrupt practices are compromising the most senior levels of government and the large state-owned defence establishments. At best, the failures of both internal and external checks and balances result in inefficiency and the increasing budgets are not spent well; at worst, they exacerbate conflict and result in human rights abuses.

Change in this deeply political and entrenched environment requires an external oversight body that is not only independent from existing structures and deeply rooted in civil society activism, but also politically influential. This is why, in late 2016, Transparency International established Ukraine’s Independent Defence Anti-Corruption Committee, known as NAKO (Незалежний антикорупційний комітет з питань оборони, НАКО).

NAKO, which comprises a senior six-member Committee and a small Secretariat, focuses on combating corruption in Ukrainian defence sector to increase the effectiveness of defence spending; improve the living conditions of service personnel; and ensure that the Ukrainian defence sector is able to provide meaningful state and human security. NAKO promotes transparency and accountability within the sector, works with oversight institutions to strengthen their capacity, and publishes high-quality research reports that have already become the basis of technical advice delivered to government institutions and of reform plans in sensitive areas. NAKO’s research and advocacy efforts have contributed to greater oversight over the state-owned defence conglomerate, Ukroboronprom; improved procurement procedures for first aid kits for frontline troops; and put defence corruption firmly on the Ukrainian political agenda.

In early 2019, recognising NAKO’s increasing impact and independence, Transparency International supported its registration as an independent NGO. We remain committed to a strategic partnership and to supporting NAKO’s work. 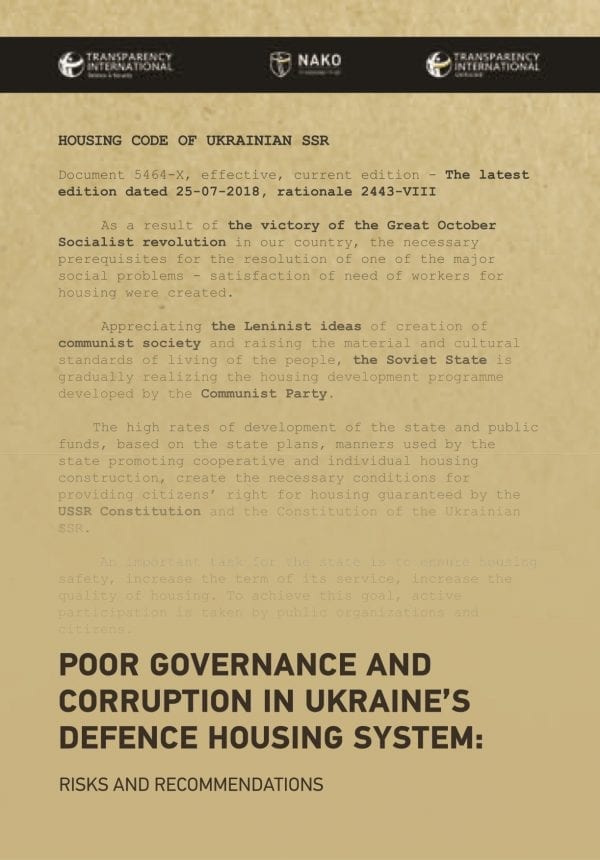 Just What the Doctor Ordered: Corruption Risks in the Ukranian Military’s Medical Supply NAKO Mandate
Where we work